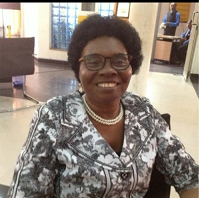 Prof. Adetanwa Odebiyi became a Professor of Medical Sociology in 1991 at the Obafemi Awolowo University. She has to her credit over 60 articles in peer reviewed journals both locally and internationally. She has co-edited a book on Nigerian women and has several chapters in Scholarly books both foreign and local.

She is a recipient of the USIS Tour for University Teachers, June- August 1996, USA and an awardee of the Association of Commonwealth University Academic Exchange Fellowship Award 1991. She was president of Nigerian Anthropological and Sociological Association (NASA) 1995-2000; Executive member of the International Sociological Association RC 49 (1996-1998). She has received grants from different local and international agencies such as Carnegie Corporation of New York (1991), WHO (1991), Association of Commonwealth Universities (1991), World Bank (1993), IDRC (1996) etc. She has supervised several postgraduate students both for the MSc and PhD and has served as external examiners for both undergraduate and postgraduate programmes at various Universities in Nigeria. She has also served to assess colleagues to Readership and Professorial Positions in different Nigerian Universities. She has served as consultant to local and international agencies such as the World Bank on the Poverty Assessment Studies (2000), National Planning Commission, The Presidency, (1999/2000) etc. She is widely traveled attending Conferences and Workshops not only to present papers but as keynote speaker.

At Sickle Cell Hope Alive Foundation, she is an advisory board member and has been involved with writing proposals, organizing outing, supporting the Sickle Cell Disease patients morally, materially and financially, supporting advocacy programmes etc.