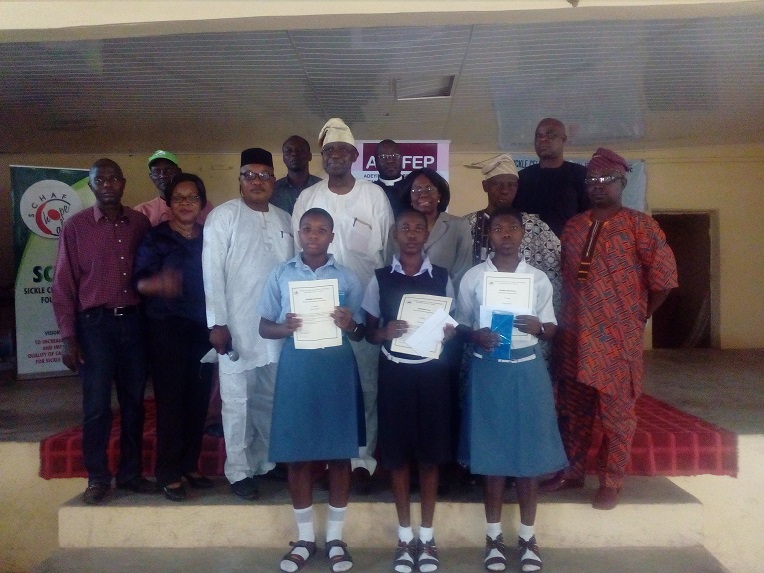 Adeyinka Ologbenla Falusi Female Empowerment Programme (AOFFEP) was held on Thursday, 18th January, 2018. AOFFEP hosted SCHAF as guest for the 2018 event. The event which took place at the C.A.C. Grammar School, Efon Alaaye had in attendance several dignitaries including the Chairman of the Board of Trustees of SCHAF, Professor Abiodun O. Falusi and the Education Secretary of the Efon Alaaye Local Government Education Authority, Hon. Steve Olu Akosile.

The Executive Director of SCHAF and Founder of AOFFEP- Professor Adeyinka G. Falusi gave a talk on her parental experience and motivation as the pivot of her achievements in life. She linked this to her place in the society as a promoter of the girl-child empowerment in Science.  Herself, a L’Oreal/UNESCO Laureate, Outstanding Woman of Science, has been empowered and her legacy in life is to empower other females. She extended the lecture to “The Role of Students in the Control of Sickle Cell Disease in Nigeria”. The lecture was focused on the need for awareness, complications and control of Sickle Cell Disease in Nigeria. An invited Guest lecture titled “Adolescent Health: A Valued National Asset” was delivered by Dr. Bola Ofi. The talk was geared towards empowering adolescents, providing basic information on their development and coping mechanisms during adolescence. A cultural display/dance performance by the students of CAC Grammar School was a side attraction and entertainment.

AOFFEP Awards of cash prizes were given to the Best Female Science Student and two (2) runners-up who were selected on merit. Commendation prices were received by the Best Male Science Student in each school. Other gifts including Parents’ Handbook on SCD were presented to libraries of all schools present.

SCHAF Awareness Lecture was well received by 149 student representatives of the eight (8) secondary schools, 58 teachers, parents and dignitaries in attendance.